Aren’t December holidays meant for relaxing? It’s been quite a busy couple of weeks and of course I haven’t been getting to my precious blog…
I find myself doing things {running, tucking in my boys, cooking, baking, etc} while mentally making notes of fabulous blog posts, but then I never write them. The days just seem very short all of a sudden.
Perhaps it’s a result of just enjoying the silly season, working on Pink Poppadom Foods and training for a half marathon in three weeks’ time..?

Right, so tonight I made deeeelish chicken livers – I was inspired by a recipe in my new cookbook {The Real Meal Revolution by Tim Noakes} for peri-peri chicken livers, but ended up going a slightly different route.

What you will need:

I started off by filling a small oven dish with tomatoes – large ripe plum tomatoes, cut into quarters and small rosa tomatoes, some halved and some kept whole – and 2 cloves of garlic, chopped. I then drizzled them with olive oil, a splash of balsamic vinegar, salt & pepper and popped them in the oven for 30 minutes at 180C.
Next, I cooked a big pot of mielie meal {maize} and kept it on a low heat for about 40 minutes.
After the tomatoes did their 30mins in the oven, I sprinkled them with a bit of brown sugar and more olive oil and popped it back in the oven for another 10mins.

When the mielie meal was almost done, I cooked the livers.

Start off by cleaning the livers and cutting into bite sized pieces. Toss them in olive oil, salt & pepper.
Use a large, heavy pot or skillet and get it nice and hot. Add the livers and let it cook for a few minutes on one side. Turn and cook the other side until golden. {It helps to place a weight or another pot on top, just to weigh the livers down and to help them get more crispy and not soggy.} Add a dollop of butter and a squeeze of lemon juice.
As soon as the livers are cooked properly and a nice golden brown, add the roasted tomatoes and let it simmer for about 2 minutes. Spoon the livers & tomatoes into a serving dish {I used the dish that I roasted the tomatoes in, it just adds extra flavour!} and scatter torn basil leaves all over.
Serve with mielie meal {or whatever you fancy – polenta will be great too! But I must say, the maize was a-MAIZE-ing!} 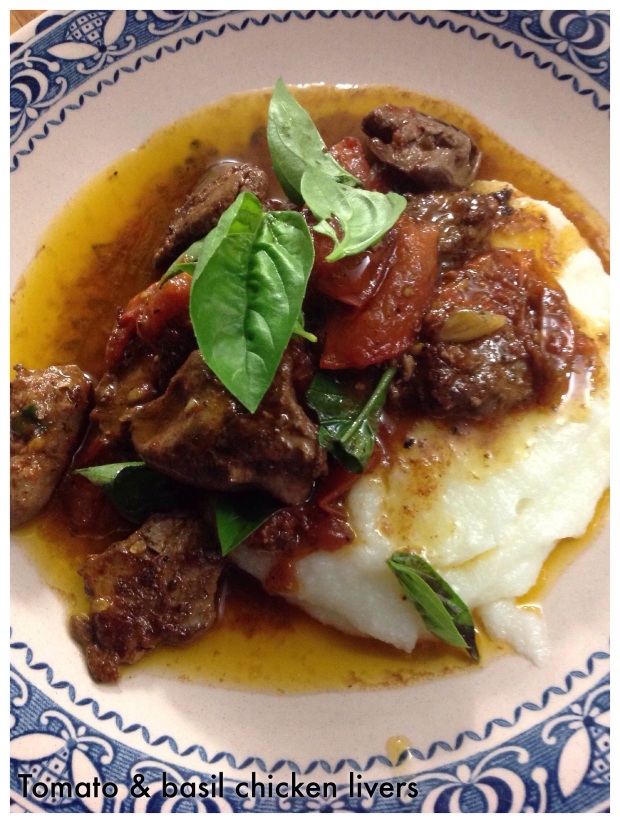 What a yummy and satisfying meal after a busy day – it definitely hit the spot.
X

One thought on “Tomato & basil chicken livers – might be the best yet!”